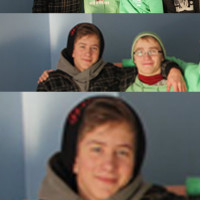 Activities of the first youth panel:

The members communicated actively via the youth panel’s Facebook page between seminars.

The skills acquired at the seminars were also put into practice. Members of the youth panel organised several Internet safety workshops for younger students in their own schools and helped run workshops at other schools.

The members of the youth panel also took part in the organisation of the Wisely on the Web youth day that was held at Solaris Centre in Tallinn on 28 October 2011.

In April 2012 the members of the youth panel performed a short play based on the animated film ‘Juss the Rabbit Discovers the Internet’ (which had been made within the scope of the project) to children at the lastekas.ee children’s mornings held in bookstores in Tallinn and Pärnu.

The members of the youth panel also represented Estonia at international forums. Kevin from Sütevaka Secondary School of Humanities in Pärnu represented Estonia on the European youth panel at the Safe Internet Forum in Luxembourg in November 2011. Tauno from Kuressaare Secondary School took part in the European summer school for youth panellists entitled ‘European Youth Speak Out in Romania on Safer Internet for Children’ held in July 2011.

Hendrik and Kairi represented the Estonian Youth Panel at the international conference ‘Risk-taking Online Behaviour – Young People, Harm and Resilience’ held in Berlin in May 2012.