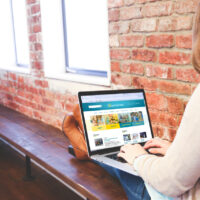 Under the initiative of the “Smartly on the Web” project, schools, and youth centres were invited to celebrate the Safer Internet Day and to organise e-safety events for children and young people during February. We are pleased to announce that, to our knowledge, more than 270 institutions organised digital safety events for children. So what did they do that was exciting?

Among schools, the  Cyber Pin Competition proved to be very popular. It is a school-wide competition for grades 1-6 that introduces the topics of digital safety and cyber security. Digital safety experts and cybersecurity talents have created tasks with varying degrees of difficulty to stimulate children’s interest in cybersecurity and IT issues in general. The competition was organised by the Tallinn University of Technology and the Ministry of Defence as part of the project “Smartly on the Web”.

In several schools, digital security topics were covered in different classes or during thematic recesses. Lessons included “Smartly on the Web” lesson plans and new learning objects. For example, Tallinn Kuristiku Upper Secondary School taught a lesson titled “Honestly about fake news”. In addition, various e-safety workshops were organised and held by teachers from their own schools as well as experts from other institutions. It was reiterated what to keep in mind when sharing information, including photos, and what to do and whom to talk to regarding problems such as cyber-bullying. Pärnu Upper Secondary School studied how deleting digital waste makes life safer. In the thematic recesses, children mostly watched themed cartoons such as Jänku-Juss and Sheeplive.

Students got to solve interesting puzzles, such as thematic quizzes, Jeopardy, tests, and a photo hunt. In Kahtla Kindergarten-Primary School, children solved crossword puzzles while measuring their time, and Raikküla School hosted the event “Safely online Escape Room“. One room is specifically built for this and divided into four rooms. Different tasks and activities on Internet safety topics are hidden in the rooms. Students are divided into groups of three (within the class) and each group has to solve different tasks/activities according to the legend in order to enter the next room and unlock the door code. They have 45 minutes to do so.

Since Valentine’s Day fell on the same week, some schools also used this theme. For example, students gave advice to their friends on how to stay safe in smart devices. Märjamaa Upper Secondary School held an event “Safe on the Internet with a friend” – different tasks were spread out over the school and if everything was done properly, the students found a treasure with their friend.

In addition, the schools organised poster competitions “Internet Rules” were organised and poster exhibitions. For example, in Pärnu Raeküla School, 7th grade made posters for Safer Internet Day using the Canvas environment and gave recommendations on how to safely use a smart device. The best posters were put on display in the schoolhouse. Several schools participated in the meme contest “The child does what the child sees”.

In some schools, the whole school family was engaged in digital security activities for the whole week. For example, at Kalamaja Basic School, older students held discussions about Internet safety, which were followed by engaging activities – they played a movement game, asking questions about Internet safety and during each answer the students had to do different movements. The students were very happy to play this game. They were involved and really thought about the topic. In addition, students created comics with the themes of “Safe on the Internet!”, “Against Cyber-bullying!” “STOP Bullying!”, and made posters on how to keep your things secret online.

The Safer Internet Day was also celebrated at Järveküla School – students discussed how to intervene in cyber-bullying, how to prevent cyber-bullying, what to do in different cyber-bullying situations, and so on. We also played Kahoot, which included various questions regarding the Internet. It is important for children to know what a good password is, how long they should spend time on their smart device, how using smart devices affects their body and mind, and how to respond to suspicious messages. All this knowledge was included in the quiz. It was good to remember and reinforce the knowledge! We ended the day with the topic of posting and commenting on pictures. We brought up various examples of how to post an appropriate and inappropriate picture on the popular Instagram. We also took the opportunity to visualise what are good examples of commenting and which are not. Many of the ideas are taken from the great lesson plan created by the “Free of Bullying” team and available to anyone on the Internet for free.

A great event “Help! I want online!” was held at Keila School that included reading and listening to digital-themed stories , meeting with the writer I. Tomusk, going over the rules of online safety and watching the Jänku-Jussi cartoon. The late-night workshops explored the digitalised cultural heritage (books, radio plays, TV productions, photographs, handicrafts) and tried to create new content based on what was seen and heard in archives using computers and smart devices.

Children at nursery schools mainly watched thematic cartoons and discussed the various opportunities and risks of the Internet and smart devices. For example, in Sõmeru Pääsusilm Kindergarten, children with the purple bears helped to create mind map about what the Internet is and what can be done with it. We discussed what children do on the computer and what the threats may be online. Our 4-year old “Mõmmikud” (eng. “Care bears”) were active contributors and thinkers. We finished by reading a book and chose to read “Jänes Juliuse arvuti” (eng. “Julius the Rabbit’s computer”) by Leelo Tungal.

All the institutions that informed us of their events were marked on the map of Estonia. Click on the map below to see what was done at that particular institution.

We would like to thank all the instructors thanks to whom the students got to participate in Safer Internet Day and are now even smarter regarding the use of smart devices.