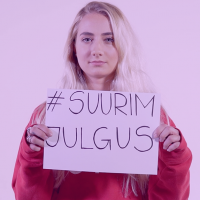 Intervention is Needed Before Bullying Becomes a Death Sentence

Maarja Punak, Web Constable
In recent years, Estonia (like the world in general) has seen growing interest in the topic of suicide, which has brought with it an increase in self-harming and games such as Blue Whale, but also tragic consequences and deaths.

In this light, the last year has been of enormous symbolic significance to web constables, as many young people have notified us of wanting to kill themselves because of constant bullying. Cases in which young people run away from home and threaten to hurt themselves or share live videos of self-harming online have become more frequent as well.

To a certain degree this trend is due to the fact that cyberbullying is becoming increasingly brutal. Bullies no longer say things like “We’ll beat you up if you show up in school”. Instead, they demand that the victim do the world a favour and kill themselves. Unfortunately, this is also the case elsewhere in the world – everything and everyone is made fun of on social media. In Estonia, this happens on YouTube, Snapchat and Facebook Live, but also in new apps such as Sarahah and Periscope. Humiliation, insults, oversexualisation, life-threatening stunts, animal abuse… all of this is often done for the sake of likes and viewing numbers. This kind of behaviour is not characteristic of most social media users, but the minority who tolerates it is very loud.

Some even go further. For instance, popular YouTuber Logan Paul visited the ‘suicide forest’ in Japan and found a man who had hanged himself. Without sparing a second thought, his entire team decided that sharing their find in public with other social media users was perfectly normal. The video got a million views before Logan removed it.

American parents have forbidden their kids from following Logan’s channel and criticise YouTube for failing to censor the video, which remained online for six hours. Parents are beside themselves, because they don’t really know whether or even how to address the topic of suicide when talking to a 10-year-old. Even if YouTube were to create a system that tracks down and removes videos that include dead bodies, this wouldn’t solve the problem. The question remains of what makes a person go so far as to gain attention by hurting or killing themselves.

New filmmaking trends are just as worrying. The hit Netflix drama 13 Reasons Why, which is now back for a second series, has not made it into the news in Estonia, even though it bears an important message. The series focuses on a suicidal teenager who decides to kill herself and share her reasons for it with the people she thinks played a part in her decision. The series has brought with it tragic cases all over the world, and what is worrying is that even young people in Estonia have watched it without having someone to properly discuss the issue with.

Technology might help us swiftly remove inappropriate content from the Internet, but we ourselves have a much larger role in motivating positive change. If an episode of the Estonian TV series Kättemaksukontor focuses on suicides and mentions Golden Butterfly, a game similar to Blue Whale, it should not result in more children to worry about, but offer positive solutions. If local YouTubers talk about one another, the insult-heavy video battles should not end with an offence report to the police. Instead, they could poke fun at each other gently and with style and thus offer competition to stand-up comedians.

Every person has the power to help us stop cyberbullying: if someone’s behaviour is inappropriate, you can block them. If people don’t follow the rules in an anonymous community, you should leave it. People would feel less motivated to film animal abuse if we stopped liking such videos in the first place. If we don’t share video clips that show people being humiliated, then perhaps these actions will stop altogether. Finally, if we see someone being bullied, we mustn’t ignore it, but intervene before it becomes a death sentence.