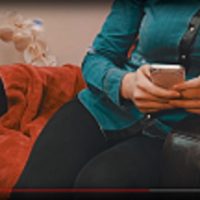 Andra Siibak,
Professor of Media Studies at the University of Tartu

It’s extremely important for every child to feel loved and cared for, but also that their parents are proud of them. Parents’ kind, heartfelt words are just as significant to a child as hugs and caresses. Nicknames and endearments (‘my teddy bear’, ‘little princess’, ‘my ray of sunshine’, etc.) used in the domestic environment generally cheer kids up and help to reinforce the warm relationship between a child and their parent. However, things are completely different when parents use baby talk outside the home or in front of their elusive social media audience. Interviews with Estonian pre-teens indicate that most young people don’t want to hear anything about them being called their parents’ snuggle-bunnies or little princesses in front of their friends and peers on Facebook. The ‘cute’ photos that parents often post of their kids could just as well go unpublished as far as the children themselves are concerned, because they leave them feeling very embarrassed.

We often hear grown-ups complain about how young people’s social media behaviour has gotten out of hand; that they often post things that aren’t in good taste or entirely inappropriate to share with millions of people. However, there is much less talk of parents themselves, many of whom should also critically review their social media habits and content creation. In fact, it’s parents who should be more self-critical, because ‘social media parents’ who actively share photos and post about their kids are the ones who receive the vast majority of negative media coverage targeted at Internet users these days. At the same time, this criticism hasn’t managed to curb parents’ desire to share things online. For instance, 74% of US parents in a survey had an acquaintance who posted so often about their children on social media that the audience felt it exceeded the bounds of good taste. Moreover, 56% of respondents knew a parent whose posts were embarrassing to their children. Surveys conducted in both the United States and Europe indicate clearly that to date, parents have not fully acknowledged their role in the shaping of their child’s digital footprint.

Surveys conducted in Estonia show that more often than not our children would like to prevent their parents from sharing family photos or have the right to stop them from posting about the life of ‘their ray of sunshine’. Similarly to studies carried out in other parts of the world, the interviews conducted by Merike Lipp, a Master’s student of Communication Management at the University of Tartu, with Estonian Facebook users aged 9-13 showed that parents generally do not ask their children’s permission before posting about them. Moreover, the parents surveyed were unanimous that they do not need their children’s permission to post information or photos about them, because they know what is best for them. Some parents said that their children have sometimes asked them not to publish certain photos in their Facebook albums or to delete a post, but also admitted that they haven’t given a great deal of consideration to such requests. In other words, the parents who participated in the study generally used their position of power to make decisions on what to post online.

As Lipp’s study showed, parents tend to forget that children’s understanding of what is ‘cute’ or ‘hip’ might be as different from their own as chalk and cheese. Parents might consider a tiny stain on a dress or messy hair as insignificant details that have no effect on the overall impression or emotion of a photo, but for the child, these details are crucial and can often result in teasing from their peers and cause a lot of worry and tears.

In general, children have nothing against their parents sharing photos of fun family holidays or successful sports competitions, but they would like to have more say about what is posted. They would like their parents to take their suggestions, requests and recommendations seriously.