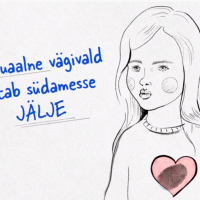 Cooperating in the prevention of child sexual abuse, offline and online

Work to prevent child sexual abuse requires a range of measures and close cooperation at the national and international levels. The non-profit Estonian Union for Child Welfare offers a free online service at www.vihjeliin.ee for anonymous provision of information about online materials depicting child sexual abuse.

Forty-one countries across the world have such online anonymous tip services, facilitating removal of such illegal materials from the Internet. In 2019 such tip websites analysed 456,055 images and video clips worldwide, 320,672 of which did contain child sexual abuse and were removed from the Internet. Ninety-one per cent of the victims were girls and 92 per cent were younger than 13 (INHOPE, 2019). Last year, the aforementioned Estonian hotline received 553 tips, 132 of which contained child sexual abuse.

According to Malle Hallimäe, coordinator of the Targalt internetis (Stay smart online) project, we can all join the effort to ensure a safer living environment for children. It is important that any person who notices child sexual abuse, whether in a physical space or online, to report the incident and remain vigilant all the time.

Sexual attraction to children or images depicting them is not a new phenomenon. The Internet and other digital technologies have simplified recording of child sexual abuse and distribution of such materials, making them more available than ever before. The children used in the creation of such material are victims whose health and dignity have been cruelly abused. Circulation of such images and video clips online essentially means that the young victim is abused again and again. There is also the risk that an adult consuming digital imagery of child sexual abuse might be tempted to act out those perverse fantasies in real life. That is why it is important to prevent proliferation of such materials online.